Harvest the Sun with Bees

2015 marked the year when we finally gave into our bee-envy and became beekeepers. Our first exposure to beekeeping came ten years ago when a local beekeeper put ten hives on our place. We quickly became fascinated with these amazing creatures - how their hives were really more like complete communities dedicated to the survival of the whole not the individual.

Last fall Don ordered all the hive components and supplies to start three hives and over the winter he worked on the construction of the hive boxes and the place where we would keep our hives. 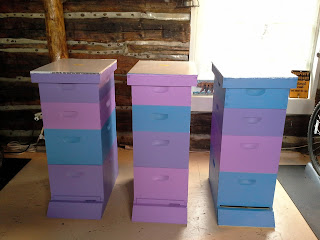 We decided that our challenging elevation and climate could be mitigated somewhat by creating our "bee yard" in a portion of our barn. We re-purposed our old stallion's east-facing stall (he passed away in 2011) so that the hives would enjoy early morning light and warmth. Protected from the strong winter winds, heavy snow and the hot summer sun, this spot seemed perfect. Plus it was easy to add electric fencing to keep out the bears, raccoons, skunks and anything else that thought the bees and their honey were easy food. 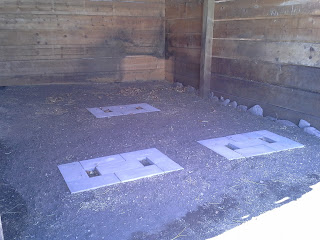 Now for the bees. There are multitude of ways to get bees but we thought the best way for totally inexperienced beekeepers was to purchase small colonies know as "nucs". A nuc includes a mated queen, several thousand of her young daughters, developing larvae which would produce more young daughters and several combs of pollen and honey which would serve as early food sources.

Most of the commercial bees are produced in the south from Florida to Texas because the climate makes it easier but these bees are not always well suited for life in the mountains of the West. After some research we decided to get two nucs from Zia Queenbees from northern New Mexico.

In early June we traveled to Taos to meet with the Zia folks and pickup our bees. The three hour drive home in our Su-bee-ru with 20,000 bees in the back seat was interesting but uneventful. 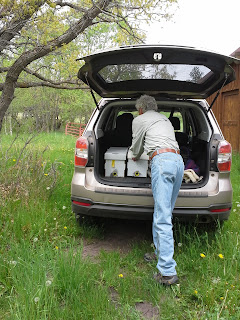 Once home we transferred the bees from their nuc boxes into their new permanent hive boxes and added a feeder box on top of each hive. Inside the feeder box was a container of sugar syrup to feed them until they could start foraging on their own. 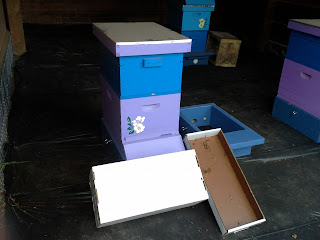 Zia Queenbees names their "survivor" queens and tracks their life history. Our queens are both daughters of Ester (a two year old breeding queen) who is a daughter of Eclipse (a four year old breeder). Definitely impressive survivors! In keeping with the "E" names, we named our queens Emily and Erin. From this point on the hives are know as Emily's and Erin's.

Over the next few weeks we added more hive boxes to give them more room for the increasing number of bees and the food storage they were building. We continued feeding them so that all their efforts could go to developing their community. 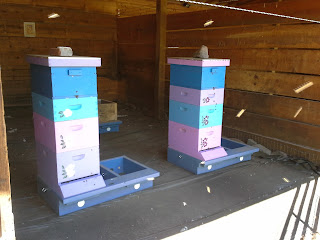 In early July a neighbor called to report a swarm of bees in her apple tree. We gathered up our swarm catching supplies (thanks YouTube for all the swarm videos) and headed over in the pouring rain. The capture went remarkably well and we installed our new bees in the third hive box collection Don had built. 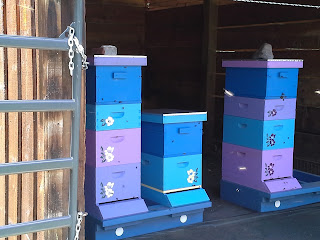 Now for a name for the new queen and hive. We decided to honor our location by naming her with an "H". Hannah and her young hive quickly developed over the summer and we added hive boxes as needed. 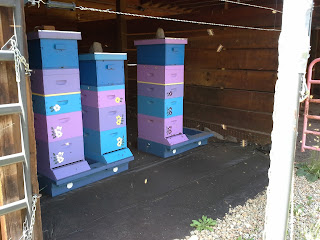 The bee's forage season winds down in September and its time for the beekeeper to help them focus their winter preparations on the core part of their hive (which in these photos are the lower hive boxes decorated with a flower painted on them). This first season we chose not to collect any honey but rather give all the hive resources to the bees to improve their chances of surviving the winter.

Don now has the bees tucked in for the winter with their hive reduced to the boxes necessary to overwinter and the hive wrapped in a reflective bubblewrap to help hold in some of their own heat. 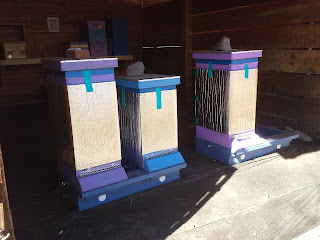 We'll check on the bees periodically through the winter to make sure that they have plenty of food stores and if necessary we'll provide both cane sugar and pollen patties. But for the most part, they are on their own and doing what bees do. In February or March the queen will start laying new eggs which under the care of the worker bees will develop into larvae and then new bees and they will be ready for another season.

Our goal from the beginning of this project was to develop a group of bees that could handle our climate and flourish. By starting with survivor bees from Zia and adding a feral swarm with local genetics, we hope we are on track. We're looking forward to the coming years when we will also have a source of very local honey for both eating and medicinal use. But mostly we will have tried to help honeybees in general by nurturing a group of bees in a healthy location.

And we consider the bees one more way to Harvest the Sun!

If you want to learn more about Zia Queenbees, here's a great YouTube video:

Posted by Homesteading with the Wild at 1:19 PM