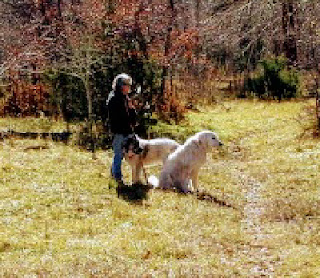 There is something deeply satisfying in the ancient profession of shepherding. I can feel that I have done this before, maybe in past times. It's not surprising. My mother's family came from the Persia-Iraq region where sheep were first domesticated more than 10,000 years ago. My father's mother was born in Scotland, not far from where the Vikings left their primitive sheep on the Shetland Islands. 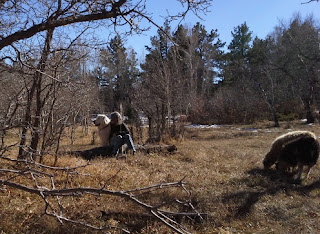 The teamwork of the shepherd and the guardian dog and their love of the sheep creates a sense of pleasure. 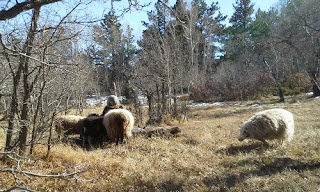 And for the sheep there is the comfort of security and safety. From that comes the rich fibers for the shepherd. 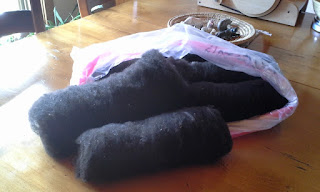 Yes, I have been here many times before. It feels good to be back.

From Fleur Creek Farm.
Posted by Homesteading with the Wild at 12:58 PM No comments:

After all the challenges we had with our bees this year we sure didn't expect to have any honey. Literally all six of our hives were new; one was purchased this year, one was a swarm capture this year, and the other four swarmed. Of the hives that swarmed three had to produce new queens and one was re-hived into a failing hive. We couldn't imagine that any of the hives would have the time to produce any excess honey.

As summer transitions into fall beekeepers start preparing their hives for winter. Among other tasks, the beekeeper will remove any honey supers (those are the hive boxes where bees can store excess honey) and start concentrating the colony down into the lower hive boxes. The "beek" will check the hive's resources to make sure they have plenty of stored honey and pollen to feed themselves during the winter months and either add frames of resources or make plans to provide food in the form of sugar and pollen patties.

Don was stunned to discover that the two newest hives had not only filled their main resource hive boxes but had also filled their honey supers. We knew it had been a very good summer for pollen and nectar because of the amazing wildflower season but we didn't realize just how good.

Last week we started the exciting and very sticky job of harvesting the honey. The old cabin became the "honey house", another of her many uses. When we were done we had six gallons of the beautiful golden stuff. 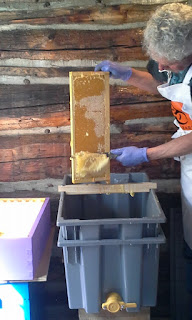 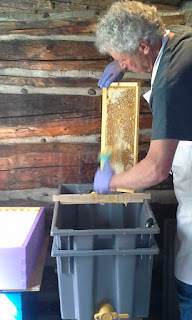 The cabin is cleaned up and ready for the next project - wool processing! (Yes, I know - I said I was going to send it out but changed my mind.)

Posted by Homesteading with the Wild at 4:08 PM 2 comments: 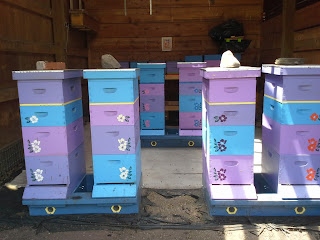 Don would be the first to admit that after three years of beekeeping the most important thing he's learned is that he has a whole lot more to learn. The apiary came out of winter with three strong hives and one that looked kind of weak. In mid-March he started feeding them a concentrated sugar syrup to help them start building back up. This year Don added a new supplement containing essential oils and kelp (Hive Alive) to their sugar syrup. Hive Alive's components are proven to strengthen a hive and help them resist disease and parasites.

The plan for this year was to add two more hives, one purchased as a package and hopefully one caught as a swarm. We picked up the package in early May and Don installed it in Hive #5. Then in mid-June we got a call from a neighbor that they had a swarm in an old apple tree. We loaded up the swarm capture supplies and headed over to find that the swarm was in almost the exact same spot as one we collected in 2015. The new swarm capture went well and Don installed it in Hive #6. All was well in beeville.....until it wasn't.

By early July it was obvious that Hive #3 was definitely failing and the bee numbers were dropping quickly. And then in mid-July the event that beekeepers dread happened - three hives swarmed. Bee hives swarm when they sense that their conditions are too crowded. The existing queen takes half the colony's bees and departs, seeking a new home. The remaining bees make a new queen (hopefully) and continue on in the existing hive.

The positive effects of the Hive Alive and our lack of knowledge lead to the over-crowded hives. An experienced beekeeper would have noticed the problem and provided more space in the hive by adding empty frames or another box but we did neither and off went they went. Hive #1 swarmed first and Don was able to capture them. Several hours later Hive #2 swarmed and again Don was successful in capturing them. Since he was pretty sure that Hive #3's queen had failed he installed the swarm from Hive #2 in with the remaining bees from Hive #3. With no extra hive boxes available he gave the swarm from Hive #1 to another beekeeper. Then two days later Hive #4 swarmed and departed before Don could collect them.

So now we had bees in Hives #1, #2 and #4 without queens because they had left. It can take three to four weeks for a new queen to be created, to go out on her maiden flights, get mated, return to the hive and then start producing brood for the next generation. Don breathed a sign of relief when he found evidence that all three hives had new successful queens and that Hive #3 (with the captured swarm from Hive #2) was also successful. And the new Hives #5 and #6 were in full production.

The bees have several more weeks before preparations for the fall and winter begin. Somehow we got lucky and our plan for an apiary of six bee hives with a nice diversity of genetics is on track.

Posted by Homesteading with the Wild at 4:36 PM No comments:

Having a small sheep flock is supposed to be simple. They can graze around the house to keep things mowed and otherwise pretty much take care of themselves. Then it seemed like a nice safe barn and pen would be a good idea in addition to a well-fenced pasture. When I discovered coyote and bobcat tracks in the snow of their pasture last winter I realized we needed another layer of protection (so much for simple).

We read up on all the options from llamas and donkeys to dogs but in the end realized that only livestock guardian dogs could handle our bigger predators - lions and bears.

The livestock guardian breeds were developed and used for thousands of years throughout the lands from the western Iberian Peninsula and Pyrenees mountains, into western Europe, Turkey and central Asia, all the way to the Himalayas. Each area developed a breed that was well suited to the locale and the predators found there.

Our research into livestock guardian dogs (LGD) identified several breeds that would be well suited to our situation and needs and in the end we decided on a Maremma and Karakachan team.

The Maremma Sheepdog traces its heritage back to the dogs of shepherds in central Italy who protected the flocks from wolves and bears. They are independent thinkers who bond very closely to their flock so they tend to stay close to home and are dominant yet accepting of non-threatening people. They were first imported to the U.S. in the 1970s for the first extensive studies on the use and effectiveness of LGDs. Maremmas proved to be one of the most successful breeds in those studies.

The Karakachan Dog of Bulgaria was developed by an ancient group of nomadic people who traveled over the region with their herds of sheep and horses. This traditional way of life continued into the early twentieth century. The breed is not well know in the U.S. as importation did not occur until the mid-2000s. They are one of the smaller breeds of LGDs but their fearlessness is legendary. Cat Urbigkit in her book, Brave and Loyal, calls the Karakachan the "bear brawlers of the Balkans" and in Bulgaria those are brown bears!

We were very fortunate to find a very knowledgeable breeder in Iowa with a litter of each and in early March our pups, at three months of age, arrived by livestock transport. Rose is a female Karakachan and Yeti is a male Maremma.

Both pups were born in a barn in the dead of winter surrounded by sheep and goats. The perfect start for future LGDs. It can take up to two years for LGDs to be fully mature and capable of 24/7 protection of the flock especially against our bigger predators. In the meantime our pups spend a good part of their day with our small flock but everyone is locked up in safe surroundings for the night.

So meet Rose and Yeti, two adorable goofballs who have enriched our lives so much!

Posted by Homesteading with the Wild at 5:10 PM No comments:

From Fleece to Yarn

It's hard to get on a professional sheep shearer's schedule when you actually need them if you only have four sheep so this was our first year to try shearing the sheep ourselves. You can read everything out there and watch a bunch of videos on YouTube but at some point you just have to go for it.

We started with Hershey, our smallest Shetland, and over the course of a week worked through the flock. The professionals can shear a sheep in 4 - 5 minutes. It took us 45 minutes each for the first three. Ian, the last one, was a real pill and we had to do a section at a time over a three day period. He looked pretty ridiculous during this adventure.
The next step is to skirt each fleece (remove the nasty parts) and then bag them up. Then it's off to the wool mill to be turned into yarn.

Etta and Ian each had 2.9 pounds while Mac had 1.85 pounds and Hershey had 1.5 pounds which all together will probably yield around 4.5 pounds of yarn or 5000 yards. Over next winter I'll turn that yarn into a variety of projects on my simple loom. I can hardly wait!

Posted by Homesteading with the Wild at 11:11 AM 4 comments:

I've finally given up trying to write an all encompassing blog of everything that is going on and decided to break it down into small stories. I just might be able to keep up with this format - maybe...

Several days ago, while moving the irrigation water around, Don discovered that the cherries were starting to ripen and it wouldn't be long before the birds noticed it too. So one of today's tasks was to put up the tree nets. This is no simple task since the trees are 8 to 15 feet tall. Several years ago we devised a primitive method of lifting the 30 x 30 foot nets up in the air and over the trees using 10 foot pieces of conduit. With one of us on each side of the tree this almost works. Of course the nets get tangled on everything possible but the thought of a glass of wine later this afternoon (and cherry desserts this winter) keeps me from hurling the conduit like a javelin. 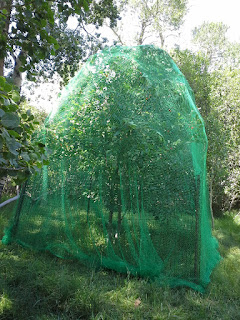 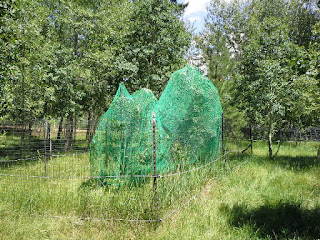 Mission accomplished and on to the next task.

From Fleur Creek Farm
Posted by Homesteading with the Wild at 2:13 PM 1 comment: