The orchard comes of age


We’ve always been surprised that in spite of the fact that our place was an 1880 homestead, there were no fruit trees. Most of the old homesteads in the area, even ones where the buildings had fallen down decades ago, had old, gnarled apple trees still standing. 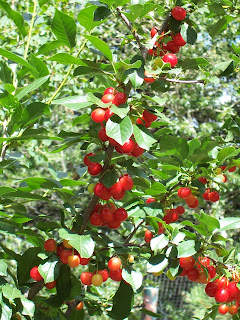 So in 2004, Don started our little orchard by planting a Bali cherry tree. The Bali cherry was originally discovered in Alberta, Canada, later propagated by Saint Lawrence Nursery in upstate New York and named for the nursery’s daughter, Bali. Bali’s are hardy to 50 below and their fruit buds are hardy to 40 below so we thought it would be the perfect cherry tree for our location at 8000’ elevation. While our temperatures rarely reach those lows, we do suffer through cold, dry conditions so it was still a guess if Bali would survive and produce fruit here.  But survive and produce she has starting in her second year. Each year, if we outsmart the birds and raccoons, we get a nice crop which we freeze and enjoy all winter.

After some research, Don identified the best apple tree prospects for our location and added three varieties – Sweet Sixteen, State Fair, and Haralred – later in 2004. While the trees grew well, they rarely produced blossoms  much less fruit. We read everything we could get our hands on about apple trees, asked everyone we could think of to try and figure out what might be the problem. We added supplements, watered religiously, talked to them, wassailed them in January – anything but still no luck. We had about resigned ourselves to the realization that our location just was out of the range of apples when this spring all three trees burst into full bloom in early May. As is often the case here, we were promptly hit with a week of evening temperatures dropping below freezing including a couple of nights down to 28 degrees. We held our breath and hoped that the blossoms would survive even though all the books said that would wipe out 80 – 90% of the fruit production for that year. Miraculously the apples are bearing fruit and in fact the most fruit we have ever had. 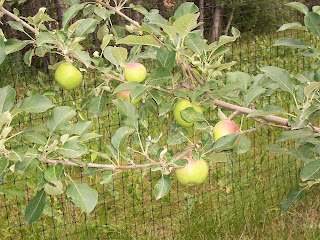 This year Don began a much more intense care of the fruit trees following the guidance of Michael Phillips’ newest book, The Holistic Orchard: Tree Fruits and Berries the Biological Way. As the book title implies, the approach is holistic and takes into account all the aspects of growth and production. It reminds the orchardist that trees prefer to grow on the forest edge, in close proximity to over-story and under-story species, and nurtured by soil that is teeming with life and provides all the nutrients necessary for survival.

Don’s program includes bi-weekly foliar spraying with various concoctions of kelp, neem, and teas brewed with comfrey, horsetail, garlic, and chamomile depending on the time of the season.  To enrich the soils he surrounds each tree twice per season with a thick layer of compost and deciduous wood chips which feed the soil organisms and in turn helps the tree roots to take-up nutrients from the soil. Rather than an organized orchard, ours looks more like a wildland area with other plants incorporated throughout that benefit the fruit trees by attracting beneficial insects and bringing up deep nutrients to the surface where the fruit tree roots can reach them. 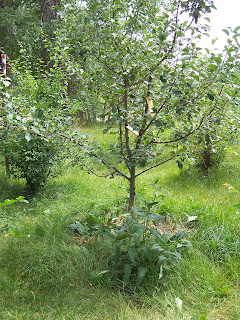 It’s hard to say whether the warmer winter allowed the fruit trees to progress to production or whether Don’s extra care is making the difference or maybe a combination of both. Whatever the case, the orchard has finally come of age. In more moderate climates this probably would have happened years ago but at 8000 foot elevation, it took 8 years.

We still face many challenges with our orchard from weather to the “locals” – birds, raccoons, deer, bears and more. Already this year the raccoons got to the last of the cherries before we did and we will have to alter our fencing design to thwart them in the future. We’ll work on the plan this winter as we enjoy cherry crisps from our frozen stash and warm, cooked apples for breakfast.

From Fleur Creek Farm
Posted by Homesteading with the Wild at 2:11 PM 3 comments: