As the earth’s climate changes we will see many changes but none so dramatic as pests and diseases as the global temperatures warm. In just the short time we have been here (20 years) we’ve seen winter become milder, snowpack melt earlier reducing irrigation water, and one of the most insidious of all – the survival of insects once held in check by winter’s cold temperatures.

The ecology of North America’s forests has always included the effects of insects but now, with the warmer winters, we are seeing forest changes on a landscape scale. Where once pine beetles and spruce bud worms came in cycles affecting mostly the weakest trees we now see giant swaths of forest killed by these insects. The winters are no longer cold enough nor long enough to reduce the insect numbers to the point where their effect on the forests is limited. Add to that the drought caused by the reduced snowpack and we have forests that are not healthy enough to resist the insects.

In June I started noticing a new insect infestation on our farm – grasshoppers. Each step I took sent dozens of them sailing away from me. We weren’t alone. Area ranchers resorted to aerial spraying of pesticides in an attempt to save their pastures and hay fields. We had no intention of using conventional pesticides with their detrimental effect on beneficial insects like bees so I spent several days researching natural control methods. I ordered (from M&R Durango) a biological insecticide specific to grasshoppers which was safe to other insects, animals and birds and allowable on organic crops. It arrived just as the monsoon season arrived delaying application for weeks. I was about to throw in the towel on grasshopper control this year when Mother Nature handed me the solution.

For the last several years in early August we are treated to the arrival of a flock of wild turkeys. The flock usually includes a mother hen and six to eight of her young chicks. As soon as we notice them, we put out cracked corn to encourage their presence and survival. This year it wasn’t long before more flocks started arriving drawn to the corn and the grasshoppers, one of the turkey’s favorite foods. Now, at the end of August, the young turkeys are nearly full-sized, the grasshoppers are nearly gone and I am reminded that Nature often provides solutions if you just look. 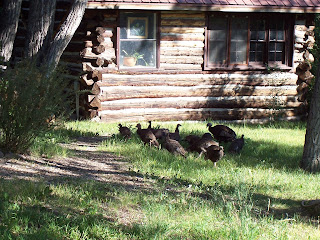 From Fleur Creek Farm
Posted by Homesteading with the Wild at 3:08 PM No comments: