Return of a Native


One of the most amazing aspects of this place is its natural diversity. The riparian areas along the major creeks are filled with alder, birch, red-twig dogwood, narrow-leaf cottonwoods, not to mention all the small shrubs and forbs.

Beyond the riparian areas is the naturally sub-irrigated meadow which contains an amazing variety of native grasses, sedges and rushes plus rare plants like blue-eyed grass. In the late summer and fall, some parts of the meadow have standing water which creates small pockets for water loving insects.

In addition to ponderosa pine, the upland ­­forest is home to gambel oak, various small fruit producing shrubs like currants and raspberries, and native grasses which offer foods and forage to everything from turkeys to deer, elk and bears.

And the jewel of the place is the wetland. This ten acre area is fed by waters from the two creeks which are held just below the surface by a layer of sub-surface rock. The wetland is home to blue spruce, Engleman spruce, alder, birch, numerous small shrubs and an amazing collection of rare and endangered  plants. Prior to its discovery here, the yellow star grass had not been seen in Colorado since 1959! Though located at 8000 foot elevation, the wetland area is characterized as sub-alpine because of the flora found here. In most Colorado locations, sub-alpine would occur at 10,000 foot elevation. 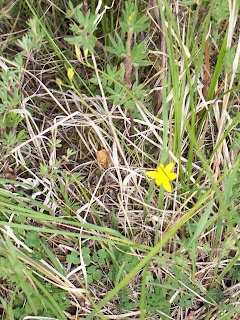 With all the natural water elements of this place, one would expect a healthy collection of aquatic species but after searching for several years we realized that one key species was missing – the northern leopard frog. Native frogs have been on the decline due to a variety of problems from loss of habitat to agricultural chemicals but since neither issue seemed to be the problem here we were puzzled by their absence. 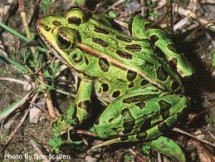 After several conversations with an aquatic biologist from the Division of Wildlife, we were given permission to re-introduce the species. The only caveat was we had to find a healthy population of the frogs within a two mile radius to collect our specimens. Undaunted, we surveyed surrounding areas and spoke with landowners. Then the following year a neighbor in the two mile circle called to tell us that the summer monsoon season and recent irrigation had created a small catchment area that was filled with young frogs.

Armed with buckets, small fish nets and irrigation boots we arrived to collect our transplants. Two hours later, covered in mud, in a scene that will thankfully never be shown in a National Geographic special, we had about two dozen one-inch sized frogs. We released the little guys around our pond and congratulated ourselves on a job well-done.

That was five or six years ago and since then we had not seen a single frog and had about convinced ourselves that our effort had failed. Then this spring Don was working at our irrigation head gate when a movement caught his attention. Before he could focus, something hopped from the stream bank into the creek and disappeared in the silt. A month later I was cutting and collecting noxious weeds around the pond when something jumped from the pond edge into the pond. I took a step closer to see what it might be just as another one jumped into the pond right in front of me. This time I saw it clearly – it was a full-sized northern leopard frog. Since then we have had several other frog sightings in different locations on the place and now realize that we did succeed. We have returned a native to its key habitat and taken another step to making this amazing place whole.

From Fleur Creek Farm
Posted by Homesteading with the Wild at 2:29 PM