Of Bugs and Birds

We’ve had the pleasure of watching a group of black paper wasps spend the summer building a large paper nest right out the study window. Over the course of the summer the nest grew from barely noticeable to basketball sized. While we couldn’t see what was going on inside the nest, we could watch the wasps working away on the outside adding layer upon layer.

According to the experts, the paper is actually chewed wood fiber mixed with saliva then applied in hundreds of layers. Considering the size of the nest and that rarely were there more than 5 – 10 wasps working on it at any one time, the accomplishment is even more impressive.

Since wasps are not known for their friendly personalities, we pretty much avoided the area under the nest all summer. The only plants growing there were penstemons and they don’t care for special treatment anyway.

And then several weeks ago a Stellar’s Jay discovered the nest. The clever Jay would sit on an oak branch patiently waiting for a wasp to appear then fly in and pick the unsuspecting bug right off the nest. When the temperatures starting dropping and the wasps remained inside more, the determined Jay started tearing into the base of the nest looking for the bugs. When that didn’t work the bird tore into the side of the nest exposing the inside chambers full of immature wasps.

I haven’t seen the Jay or the wasps in several days. All that remains is the forlorn nest. It’s been an interesting lesson of nature where there are neither villains nor victims but only the ongoing circle of life. 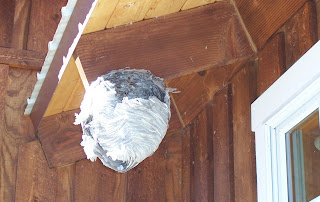 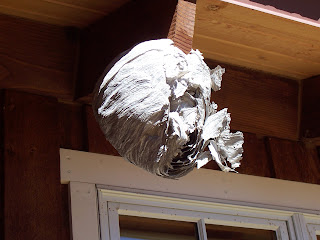 From Fleur Creek Farm
Posted by Homesteading with the Wild at 5:07 PM