The calendar may say that the first day of winter is December 21st but for us winter arrived last Thursday night. Snow started falling during the night and continued on and off until Sunday. When it was over we had more than 24" on the ground and everything else for that matter. 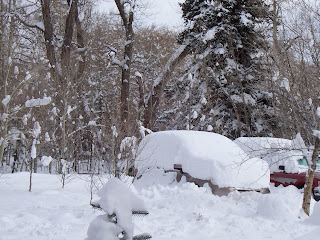 I know we parked the car around here somewhere.

It took a bit of work with our old tractor, shovels and our neighbor's plow but we eventually had paths between the buildings and the driveway cleared enough to drive out.

Our flock of wild turkeys found themselves trapped here until the driveway and county road was opened up allowing them to head to less snowy locations. We kept them well fed in the five days they were stuck here and they re-paid us with lots of ongoing turkey chatter and a significant amount of turkey poop so the whole area around the house and old cabin smells like a poultry farm. The turkeys even roosted in the surrounding big cottonwood trees at night so they were ready for an early breakfast. 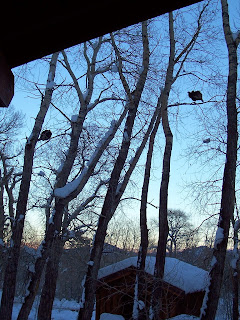 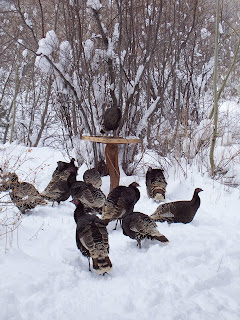 When the sun finally reappeared Tuesday morning the scenes were spectacular. It's been quite awhile since we have had this much snow from one storm system and it is sure welcome. We can only hope this is the start of a good snowy winter. 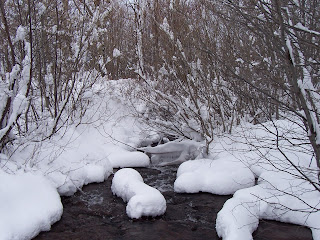 And on this day before Thanksgiving, we are reminded about how thankful we are for family, friends, and neighbors. Happy Thanksgiving to all!

Posted by Homesteading with the Wild at 2:39 PM