Keeping up with summer’s tasks


It’s nearly overwhelming keeping up with all the homestead tasks that arrive with the summer weather. It seems as though everything requires our attention during this warm but short season. More than likely, before the calendar says its fall, it will snow. But before then, we have a lot to do.

For the third year in a row, this year’s snowpack was so low that we have not received any irrigation from our water rights. Rather than try to make sense of the Colorado surface water laws, just understand that Colorado’s law states that those who use the water first have the first right to that use. Every water right is assigned a priority based on this concept. The oldest and most senior water right in the state is 1852 in the San Luis Valley. Our Valley’s rights started in the late 1860s and are generally junior to those on the eastern plains which only make sense because those eastern areas were settled and irrigated before ours. Our own water rights are from 1880 and 1882 which in normal snowpack years gives us irrigation water throughout the summer. 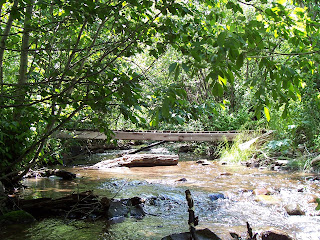 But this year South Brush Creek, the source of our water, is eighteen inches below its normal June level. In a good year it will lap our foot bridge. Coupled with the ongoing drought and drying winds we are forced to water from our well to keep veggie crops, fruit trees, and other gardens alive. Portions of the pasture that are not sub-irrigated have dried up. 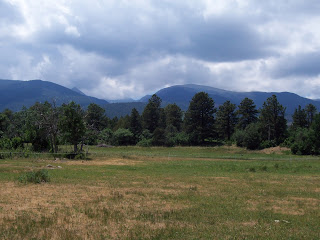 Irrigating takes a lot of time because the water flow must be changed constantly as areas are saturated. We don’t have that task this year but instead must balance the use of the water from our well to keep important crops surviving as we wait for the start of the monsoon season in July. This year we may be getting lucky as some rains have begun. We can only hope that a long, wet season is arriving.

This looks to be another good year in the orchard though we did have to dodge several freezing nights in early June.  The fruit trees are fed throughout the growth season with both foliar sprays and soil amendments. The early sprays include liquid fish, kelp, neem oil and various herbs. At blossom time Don only uses Bee Scent to attract the pollinators. Following petal fall he goes back to foliar sprays and includes soil additives such as Gardener’s Special, wood ash and compost to help the trees not only grow fruit but also start the buds for next year’s crop. Don also starts thinning the immature fruits so that only one or two are left per blossom cluster. If he didn’t thin, we would have lots of small fruits rather than nice large ones.

We also beefed up our fencing around the orchard this year. Last year the raccoons kept finding or creating ways in and enjoyed more fruit than we did. So this year we added two strands of electric fence wire powered by a solar charger, one at nose height to a raccoon and one at nose height to a bear. When we get closer to fruit ripening we’ll add some strips of aluminum foil coated in peanut butter to the electric wires. This actually attracts the animal robbers for a quick lick followed by a quick zap and a permanent lesson in avoiding the area. While I have never stuck my tongue on the hotwire, I have contacted the wire and been zapped more times that I would like to recall. It’s definitely unpleasant but not lethal. 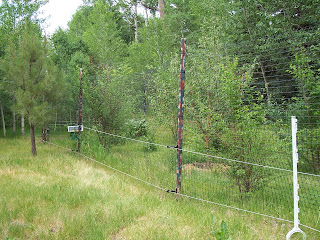 The grazing season arrived on May 17th when our neighbor and friend brought in 4 heifers, 2 steers and one old cow (who was here last year). We have to keep a closer eye on the fences and water tanks now. We get a lot of elk traffic through the pasture with elk cows and their new calves moving back and forth from the forest during the day to the pasture at night. Elk aren’t the greatest fence jumpers and often cause some damage that allows the cattle into areas where we don’t want them right now. It’s a daily task to fill the water tanks and check and repair the fencelines.

The battle to control exotic and noxious plants in the wetland and pond areas is one that I will fight as long as we live here. Brought in with the winds and free-roaming animals, the unwanted plants flourish and out-compete the native plants because there are few natural deterrents. In their native lands, these plants were controlled by disease and insects but here these natural forces are absent so I must take up the fight. Our main problems are houndstongue, a biennial that is controlled by cutting the flowers and stopping the cycle, and several types of thistles. The most difficult thistle is Canada thistle which is a perennial and spreads by root growth. Over the years I have tried many different natural controls from dead-heading to experimental insects with little success. If anything, I have lost ground with this thistle so two years ago I started using a chemical. I swore I would never use chemicals here but have since  realized that nothing is that cut and dry. By careful spot-spraying I am slowly taking back areas that were badly infested. Three or four mornings a week, we head out with shovel and sprayer to continue the battle.

The veggie garden is coming along nicely this year with garlic, onions, potatoes, summer squash, tomatoes and greens. We had a little hail several days ago but most of the veggies survived without too much damage. Only the greens are producing anything edible at the moment but everything else is full of promise.

Of course there are countless other tasks to keep up and soon we will start in on firewood for the winter. But for now we enjoy the time spent with the plants, the cattle, the wildlife and all the other parts of this little homestead. And we pray for more rain.

From Fleur Creek Farm
Posted by Homesteading with the Wild at 4:43 PM