From Beginning to End 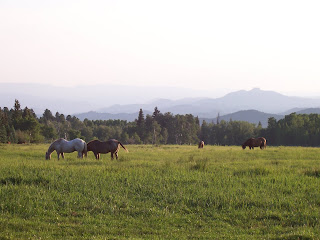 In the 80s and early 90s, we were involved semi-professionally in the horse business. We had purchased a well-bred, gorgeous three year old stallion and started gathering really nice broodmares for him from around the U.S. During this time we showed horses around the West, sold offspring of our stallion, and stood our stallion to select mares owned by other breeders. In attempt to reduce the potential for injury to all of us (stallion, mare and us) we learned and used artificial insemination to breed our stallion to the mares. I always found it amazing that with a little scientific know how, we could produce a new horse (not to mention some semen and eggs).

We started reducing our horse herd around 1992 in anticipation of moving to the Valley and arrived in 1993 with only six horses. They included our stallion, our favorite broodmare who deserved retirement and four of our stallion’s offspring – two mares and two geldings.

Our intent was to continue riding the geldings but life (including trying to make a living and building a home) got in the way. We never really got back to riding and our horses ended up enjoying an easy life.

In 2000 a very bad bout of colic ended the life of our old broodmare. In 2009 our youngest mare developed a case of Cushings Syndrome that was resistant to treatment and we had to destroy her.

This year we are coming to the realization that the remaining horses were getting pretty old as they range in age from 21 to 31, the stallion being the oldest. Each has their own problems from missing all molars and not being able to eat hay (our stallion) to varying degrees of lameness in the remaining three.

This week our youngest gelding reached the point where his lameness was just too much for him. We had tried managing it with oral pain medication twice a day but we could tell we were losing the battle. At feeding time on Sunday the look in his eyes told us that he had grown weary of the pain and difficulty in getting around.

Monday morning we made the decision to put him down. Our vet arrived just before lunch and agreed with our decision. In a few moments it was over. As I knelt next to him on the ground I thought about how we had been with him from his very beginning when he was no more than a single cell until his very end.

There are only three left now and I suspect that before winter there will be fewer. I have had horses continuously since I was 12 years old (nearly 50 years) and I can’t imagine what it will be like when they are all gone. The pain of losing each one seems to grow and I think I prefer to end my horse owning days with the loss of the last one. It is just too hard to say goodbye.

Posted by Homesteading with the Wild at 4:30 PM