This year in an effort to better manage the grazing in our pasture and to prevent grazing in the wetlands, we installed a new style of electrified fencing along the west side of our meadow. Up to now we have tried to use a temporary style of electric fencing only to have it torn up multiple times per week by passing elk. We decided it was time to come up with a better design that would stand up to elk activity, keep the cattle where they belonged, be safe for our horses, and wouldn’t require constant repair. 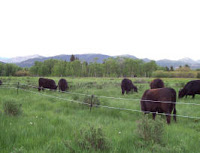 After studying many different examples and talking with a variety of people who probably knew a lot more than we did about fencing (just to name one subject), we designed a fence that has high visibility which helps the elk and horses see it, is flexible so that if the elk do hit it the fence posts allow the fence to bend down to the ground and bounce back up, and was simple enough to build by the two of us without the use of heavy equipment. The last factor was really important since all the materials had to be hand carried over 1500 feet across boggy ground. Anyone who has built standard wire fencing with heavy wooden and steel fence posts can appreciate this aspect.

The fencing system is based on the use of Powerflex posts which are a polypropylene (70%) and wood (30%) composite. These innovative posts have a greater strength, lighter weight and superior flexibility compared with steel posts or inexpensive plastic step-in posts.

The electrical charge is carried by a poly-braid rope that is a safe alternative to hi-tensile wire. This rope has a breaking strength of over 1300 pounds. Because it is composed of two strands of ¼” polyester rope, one black and one white, it has a high visibility factor no matter what the background (green pasture or snow) which is important for wildlife and horses. We use a solar charger to apply the electrical charge.

We built the fence with the posts spaced approximately 30 feet apart and two wires spaced at 18” and 30” from the ground. This spacing allows deer and elk to easily jump the fence reducing the potential for entanglement that often occurs with 4 and 5 wire steel fencing. In addition, three gate openings were included in the fence in locations of recurring wildlife movement. We leave these openings be left open during the non-grazing season to allow for ease of movement by deer and elk.

We have completed our first grazing season and I must admit I am pleased with how well the new fence functioned. It did everything we needed it to do – kept the cattle out of the wetlands, kept the elk from flattening posts and dragging the wires off in all directions, and kept the horses from killing themselves on a new fence line. The next test will be the winter season that can drag a fence down to the ground. I’ll report back in the spring on how that went.

We were very fortunate to receive some funding to design and construct the fence so thanks to the Colorado Natural Areas Program of the Colorado State Parks and the Grazing Land Conservation Initiative for financial assistance.
From Fleur Creek Farm
Posted by Homesteading with the Wild at 5:04 PM 2 comments:

You may have noticed that my weekly blogs have turned into occasional blogs. Or maybe you didn’t. As is the history of rural Colorado we in the bust part of a boom and bust cycle. These cycles have occurred pretty much since whites began inhabiting the West and while they often are based in real estate, they affect many other parts of the economy. What started as a downward slide of the general economy has finally taken most us with it.

We have been limping along since September 2008 by cutting back, dipping into meager saving, and did I mention, cutting back. Such is the nature of those of us who make our living by someone else spending money. Since we left our government jobs in 1993, we have tried to make a living on our own. By staying flexible and constantly looking for opportunities, we have been able to get by. Some years have been pretty good and some not so good but overall we have made enough to survive in this rural and distant location.

The last year has been the most difficult we have faced since leaving “real jobs” with a regular paycheck, employer paid health insurance, retirement plans, and normal working hours. To make a living we usually have three or four different endeavors going at once hoping that the diversity would balance the income stream out some. One by one they have slowed down and then disappeared. At the end of September we had finally earned our way to 50% of the poverty level.

Just when we were starting to wonder if we had finally reached the end of this trail another opportunity arrived. A small business owned by a family member is actually flourishing and they needed help handling the order shipping. It is a bit of a challenge from this rural location but we are making it work and we are even able to hire a neighbor to help out. We put in ten hours a day, seven days a week. Who knows what the future holds for this small business but for now we are thankful for the opportunity.

People always wonder how we make a living in paradise. When asked, I tell them we are self un-employed. It seems the best description of our situation.

From Fleur Creek Farm
Posted by Homesteading with the Wild at 10:35 AM No comments: